TP-Link has used on several previous routers. Shrouded in black plastic with venting holes for heat dissipation across its top and bottom, the base of the base is relatively unassuming and unremarkable. However, what will gain attention are the six external antennas that flip up from the base with three on each side. It’s a far cry from some of the designs we’ve seen from mesh router systems that aim to look more like home decor, but it can be tucked away or mounted behind furniture if its aesthetic becomes an eyesore. measuring in at 7.9 x 7.9 x 1.5 inches (200 x 200 x 39 mm), but the antennas push its height to around 4.5 inches (114 mm) when extended, raising its profile by quite a bit. On the front of the Archer A20, you’ll find the usual batch of system lights showing the status of each WiFi band, your internet connection, and connected USB devices. There’s also a WPS button for connecting wireless devices, a toggle for quickly turning the WiFi signal on or off, and a button to put the router in night mode, which kills the status lights. 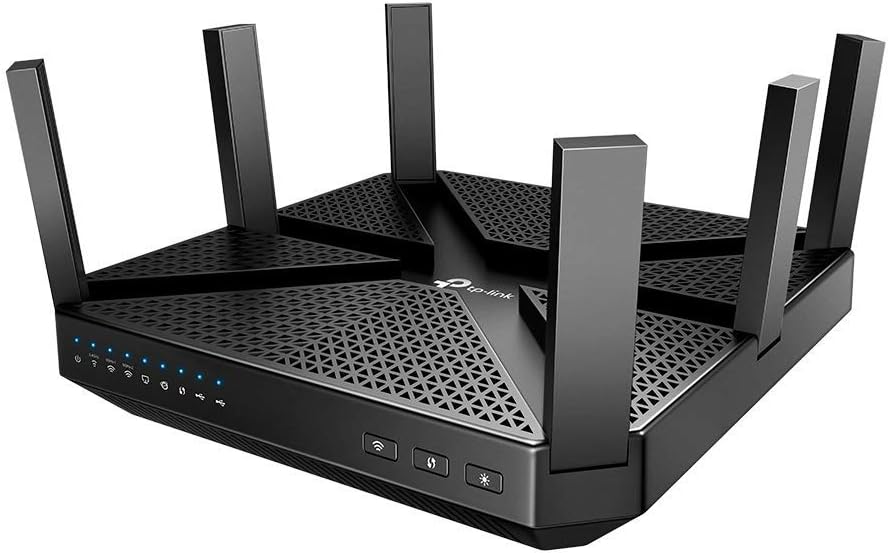 Around the rear, the Archer A20 includes four Gigabit Ethernet LAN ports, one USB-A 3.0 ports, and One USB-A 2.0 port, along with a power switch and a recessed reset button. The inclusion of a USB 3.0 port isn’t something you’ll always find on cheaper routers and its speeds make it a great choice for connecting media drives for access over your network from all of your devices. While you can go through the web interface from your PC to get the job done, TP-Link’s Tether app for iOS and Android is probably the most user-friendly way to set things up. Once you’ve plugged everything into your router and turned it on, you just download and open the Tether app to get the things started. You’ll be guided by the app through a handful of steps that let you pick your network name, assign a password, and choose which WiFi bands you want to use.

Once set up, the Tether app acts as a more simplified version of the web interface to manage your various settings. You won’t find the same robust set of customization features as the web interface, but the app allows you to quickly check for firmware updates, reset the router, see a list of devices that are connected and which bands they’re using, and even perform speed tests. You can also use the app to turn on guest networks and connect the router to services like Amazon’s Alexa and IFTTT (If This Then That) for voice control and automation.

Both the web interface and the app also let you turn on and adjust features like the built-in Antivirus powered by Trend Micro, parental controls, and Quality of Service (QoS) to prioritize traffic. However, the web interface is where you’ll be able to get much more in-depth with your settings. For most people, you’ll likely never have to touch any of the more granular DNS and MAC settings in the web interface, but you will have to use it to enable features like Smart Connect, which combines the three WiFi bands under one SSID and dynamically switches your devices between 5GHz and 2.4GHz to maintain the best connection.

There are no reviews yet.

We pride ourselves on customer service excellence and astute punctuality when it comes to delivery. All orders received same day are processed same day or next. We deliver within 1~2 days in all emirates in the UAE and 2-4 days to the Sultanate of Oman.

Tracking Number(s) are only provided if delivery takes at least 8 days.

Got questions? Call us 10AM to 9PM

Get the latest deals and news

Chat with US
Start a Conversation
Hi! Click one of our member below to chat on Whatsapp
The team typically replies in a few minutes.
Contact
Whatsapp